DESCRIPTION OF THE SCENERY from A Cavalier for Milady:

A parlor in an old house in a smart section of Manhat­tan. The furnishings are Victorian – chic, an interior that could be created by Johnny Nicholson.

“a spirit of mad eclecticism, combining trash-bin chic with florid romanticism, a look he once described as “fin de siècle Caribbean of Cuba style.”

the photo is by his partner, Karl Bissinger “who served the cafe as an early business partner and a sometimes gardener and host, made a living curating social tableaus for magazines like Vogue and Harper’s Bazaar.”(John T. Edge, “Debts of Pleasure”, Oxford American, Issue 82, September 16, 2013;)

From Annette Saddik’s (the editor) notes on the play:
In the Harvard Theatre Collection there is a draft of the play titled “Magic is the Habit of Our Existence.”

DK Notes: “Magic is the habit of our existence” is a line of dialog in Williams’ play Out Cry (a 1971ish rewrite of the 1966 version of his The Two-Character Play.).  In  a 1971 interview Williams said of the first version of The Two-Character Play, “I wrote it when I was approaching a mental breakdown and rewrote it after my alleged recovery. I was thoroughly freaked out.”

From Annette Saddik’s notes:
Dating the action of the play:
This play mentions the television show Cannon, starring William Conrad, which was a crime drama series that aired Tuesday nights on CBS from 9:30 – 10:30 and ran from Sept 14, 1971 to March 3, 1976.
ACTING STYLE:
Tennessee Williams is thinking of Spectre de la Rose, of course.I’m thinking of the hands in this video 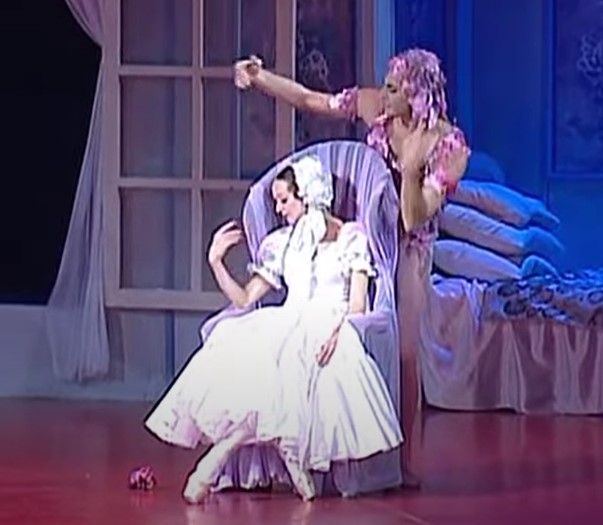 (Nikolay Tsiskaridze’s hands, but also the acting and arm gestures of Zhanna Ayupova- dig the bonnet!) All of this suggests an acting style to me for the dancers (and actors).

The Ladies as Cinderella’ Stepsisters

*by the way — I saw this — I had a big crush on Anthony Dowell….
NOTE ON NIJINSKY
Nijinsky, at the time that Williams is writing and thinking about “Cavalier for Milady” is part of a pantheon of great artists whose lives fascinated Williams, all of whom had cracked up.  These include F. Scot Fitzgerald, Zelda, too, Van Gogh and Jackson Pollock.  In fictionalized form, a little earlier: the great ladies of “Sweet Bird of Youth” and “The Milktrain Doesn’t Stop Here Anymore.”
This echoes his consideration of his own career (and forced asylum in the “Friggins Division of Barnacle Hospital in the city of Saint Pollution,” as he puts it in the poem “What’s Next on the Agenda, Mr. Williams?”
The split between the earlier acclaimed “dancing spirit” which had fled the aging body is dramatized in Williams’ “Clothes for a Summer Night” (with its ballet imagery connected to Zelda), in Williams’ “Day on Which a Man Dies” (with its Gutai performance art), and is a part of Williams mythic images as far back as “The Parade” in 1940 when the older (29!) writer is watching the younger (19) dancer identified with Nijinsky with an understanding that he, the 29 year old writer, will have a longer shelf life (“Something Cloudy, Something Clear” articulates the balance of this understanding as Williams grew older).
My point is that the Nijinsky of the play is not the Nijinsky of history, or the diaries as we know them now, but the Nijinsky of Williams’ understanding and projections, and Nijinsky‘s diary as published and shaped by Romola. She writes in her introduction to her version of the diaries:  ” He could not escape, with his incorporeal, sensitive nature, the fate of all great humanitarians — to be sacrificed.”
This kind of twaddle echoes in Suddenly Last Summer, etc, but I think Williams is sensitive enough to the manipulation of his own image (by himself and others) to try to get to the “spirit” of Nijinsky freed from the facade of the diaries.
Nance reaching out to embrace, or just touch, Nijinsky is not just lust, but the desire to connect to the dancing spirit of past artistry, as Williams puts it in the Jackson Pollock-inspired painter of “The Day on Which a Man Dies”:

MAN: Where are they, where did they go, the images, the visions?

[A Stage Assistant opens the panel again to reveal an abstract design of birds in flight.]

MAN: —They say if you wait for them, they’ll come back. – Sometime, by something or someone, something was broken in me and to repair the break I used a-what? -imitation of–what? -a frantically and fiercely aggressive imitation of a pride I could only feel under liquor and drugs, and out of this I -created, attempted to-create.

His dance to the music box : Music. Arensky’s “Vals a Deux Pianos”?[She returnsto the music box.] Vaslav: You want me to dance again? Nance: Please.[He dances…
https://youtu.be/MLnwYotkkQU
“And today I had a lunch catered by Chanticleer under the drier at Mme. Rubenstein’s.”
Helena Rubenstein’s salon was at 715 Fifth (between 55th and 56th)
“Le Chantelcair” — if that’s what she means was 18 East 49th (just off Fifth) 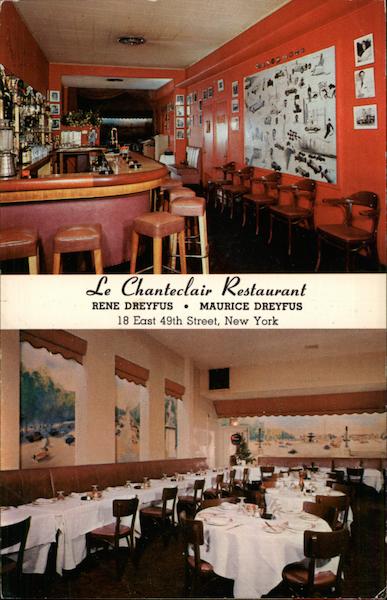