For uptodate information on classes go to
DavidKaplanTeacher.com

In 1960, Marc Garanger, a 25-year-old draftee who had already been photographing professionally for ten years, landed in Kabylia, in the small village of Ain Terzine, about seventy-five miles south of Algiers. Like many politically engaged young men, he had put off his departure for the army as long as possible, hoping that the war would end without him. He was soon selected as his regiment’s photographer.

General Maurice Challes, head of the French army, attacked the mountain villages occupied by two million people, some of whom had joined the Algerian resistance, the FLN. To deprive the rebels of their contacts with the villagers, he decided to destroy the villages and transfer the population into regroupment villages, a euphemism for concentration camps. Soon Garanger’s commanding officer decreed that the villagers must have identity cards: “Naturally he asked the military photographer to make these cards,” Garanger recalled.“Either I refused and went to prison, or I accepted. I understood my luck: it was to be a witness, to make pictures of what I saw that mirrored my opposition to the war. I saw that I could use what I was forced to do, and have the pictures tell the opposite of what the authorities wanted them to tell.”
https://www.vintag.es/2017/11/stunning-portraits-of-algerian-women.html

FROM  “Genet’s New Play: The Screens” by Marc Pierret

The danger for Said, whatever his choice, is that he may become someone—a hero or a beggar-thief; for even the humiliation into which others transform your flight or your refusal can fill you with being and distill in you honorable thoughts. These thoughts push you over the brink and you topple into the Good, along with cathedrals, uniforms, and vamps. This is why Said becomes a traitor in whose skin, however, he does not agree to immobilize himself. Perhaps “why” is too strong a word. Said does not reason; reason arises from the Good. It is better to understand Said’s behavior (he seeks the lowest depth of abjection; his very search for it is itself abject) as a mystical renunciation, an attempt to escape the grotesque and afflicting positivity of symbols. But, unfortunately, he is bound to these symbols by his own stubbornness.

FROM Genet, a Biography by Edmund White, Chapter XVII

This must surely be one of the strangest declarations of love ever written, with its elevated diction linked surprisingly to the stuttering of spoken demotic, with its fierce embrace of darkness and despair that, equally surprisingly, expresses the love of two Dostoevskian sufferers, a love as searing as it is devoid of dignity, as buffoonish as it is tragic, as intense as it is unsentimental, as devoted as it is treacherous. Characteristically, when Genet discusses The Brothers Karamazov in an essay written in about 1981, he prefers the filthy brother Smerdyakov to the Christ-like Alyosha. Blin felt that this love—a love that uses words of hatred and words of contempt—was the real subject of the play, not colonialism or politics.

More from Chapter 17, Genet a biography by Edmund White

Genet: “Near the screen there must always be at least one real object”(wheelbarrow, bucket, bicycle, etc.), the function of which is to establish a contrast between its own reality and the objects that are drawn.” The implications for the acting of the play are what the poet Marianne Moore called “imaginary gardens with real toads in them”

Maria Casarès, the great French actor, who performed La Mère, Sa’id’s mother
in Roger Blin’s first production at L’Odéon in 1966  had this to say as she was
rehearsing the part:

I don’t think I’ve ever had a text so alive, also one that requires so much from
the actor, which demands so much of him [sic]. It’s not so much a matter of a
text that’s more or less arranged… Each word has to live, each object has take on its weight…and I don’t know whether the moon exists but it must exist for
the actor who speaks of it. You can’t put [the moon] in a sentence but at the
same time this kind of demand keeps in you an incessant taste for invention…
so it’s that…it’s terribly alive in the hand, it’s like a living matter that doesn’t
stop moving and that you’ve got to take with you at the same time, of course,
to incorporate in yourself… and which carries you…You’ve got to have vitality
equal to that of the play to be able to do it…You’ve got to have the breath…because if there’s ever a play with breath – well, that one…And then you’ve got to
have…a kind of lightness, of levity, even in the strongest bits, if not tragic,
because, although tragic…but even in the blackest things there’s a kind of
levity as if you were chomping enthusiastically into things.

THE LIEUTENANT:
Good warriors, brave warriors, of course, but above all handsome warriors. Therefore: perfect soldiers, rectified by artifice if necessary. 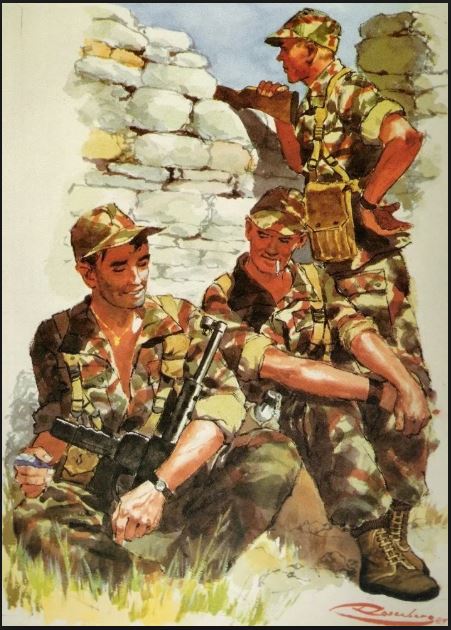 and cut and paste this link below for footage from Roger Blin’s original production including the scene where the mother kills the soldier:

FROM  “UNVEILING THE VOID by Clare Finburgh

… the blank page that re-emerges allows for endless new compositions

and quoting Philippe Sollers:
“Genet describes the opposite of melancholic nausea; he describes permanent ecstasy,” 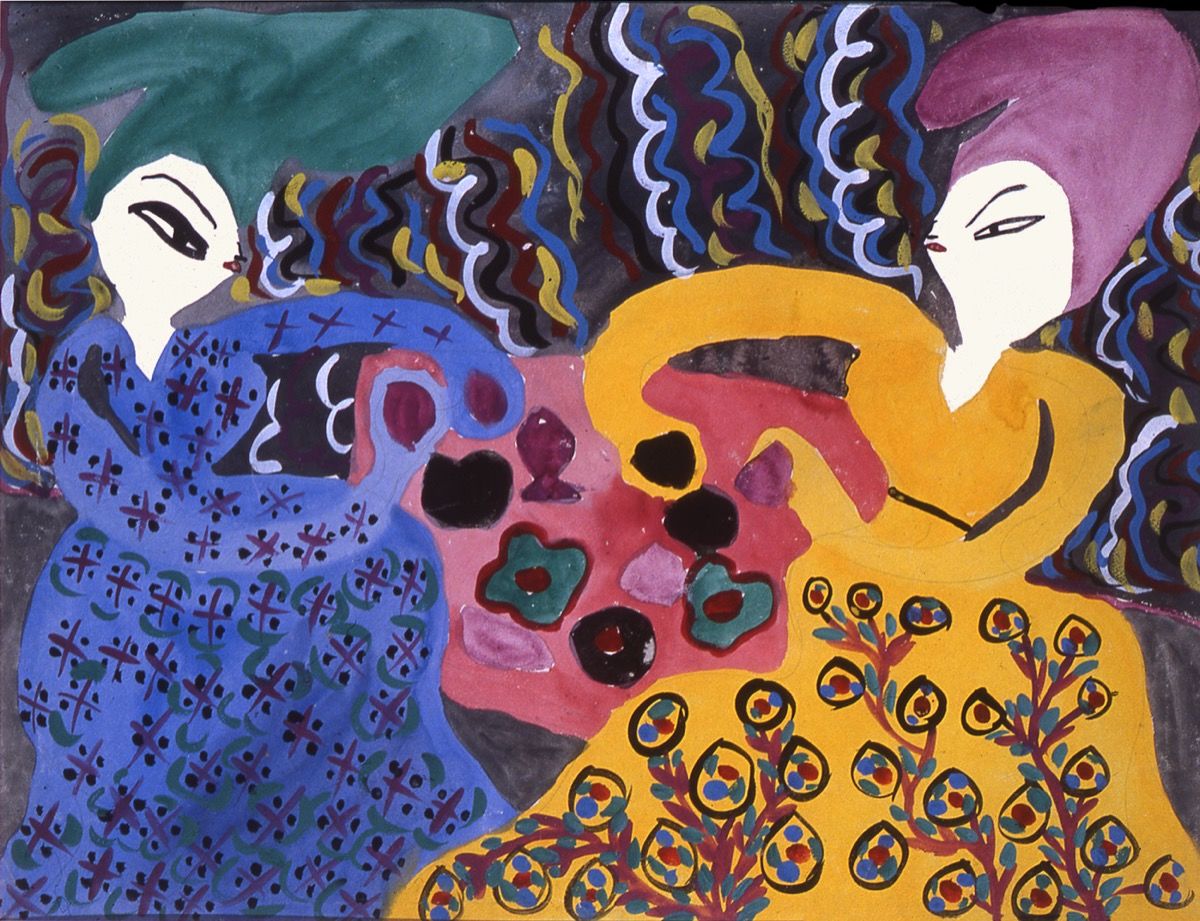 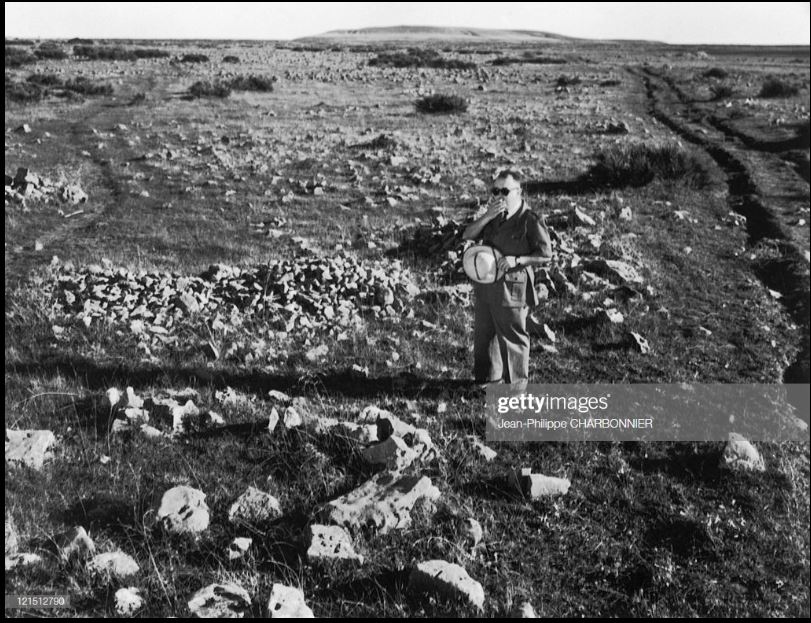