The 9th season of the festival, curated by David Kaplan, focused on the  theme of friendship in plays written by Tennessee Williams — and plays written by his friends: Carson McCullers, Yukio Mishima, Jane Bowles, and William Inge.  Continue reading → 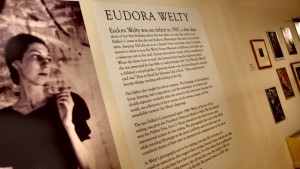 The Welty Biennial, curated by David Kaplan,  is named after Eudora Welty, who was born in Jackson, Mississippi in 1909 and died there in 2001. She wrote stories, novels, essays, memoirs and book reviews. She took photographs.

Inside the galleries of the Welty Biennial are Eudora Welty’s words and photographs along with the work of other writers, photographers, and the artistry of painters, quilters, video-makers, and sculptors. Welty and the artists of the Biennial share a vision, and a source for their art, in the culture of Classical Greece which flourished over 2700 years ago. 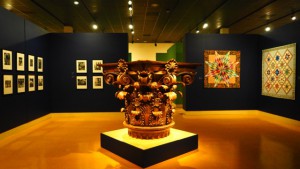 The exhibits of the Welty Biennial include commentary by novelist Jesmyn Ward, winner of the 2011 National Book Award Winner for her novel Salvage the Bones; ninety photographs by Clarence John Laughlin, best known for his images of ruined plantation houses; star quilts made by Dorinda Evans of Clinton, Mississippi, whose quilts won the Constellation prize at  the 2015 Pieces & Strings Quilt Contest and Show;  graffiti by Armando Staten (aka TOPZ); electronic Constellation sculptures by James Seawright and virtual sculpture videos by Mimi Garrard. Both Seawright and Garrard are winner of the life-time achievement award from the Mississippi Institute of Arts and Letters. 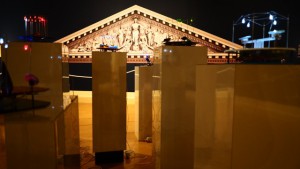 These are exhibited along with full-scale replicas of fragments from the ruins of Windsor Plantation in Port Gibson.  A hologram of the triangular pediment sculptures from the Mississippi State Capitol (sculpted by Robert Porter Bringhurst in 1904) is also on display. Photos of the exhibit by Ride Hamilton. 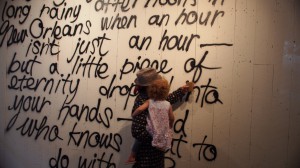 Father and daughter and a Williams quote, photo by Ride Hamilton