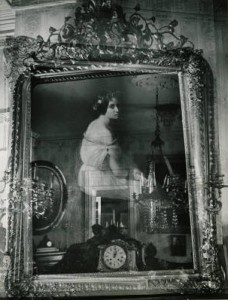 The flower called asphodel is waxy and pale. The leaves are gray. It was named by the ancient Greeks, and grew, so the Iliad has it,  in the meadow of the underworld where dead souls linger.  Asphodel is also the name of an ante-bellum plantation house near Jackson, Louisiana, built in the 1820s and set on fire during the Civil War. What survived turned to ruins presided over by a pair of sisters, the Misses Smith, who lived at Asphodel without ever leaving it for forty years. When Eudora Welty set a story in ruins called Asphodel she was thinking of all these asphodels and more. She was thinking of the ruins of Windsor, the name given to a field where twenty-two Corinthian columns stand forty feet tall a ninety- minute drive northeast from where Welty lived in Jackson, Mississippi.

Welty went to picnics at the ruins of Windsor. She photographed herself there as a shadow on the road leading up to the columns. In Welty’s story, there are six columns, not twenty-two and they’re Doric, not Corinthian, that is to say they’re capped simply with a circle and a square, rather than with the curling acanthus leaves that top Corinthian columns.

Welty simplified the ruin, reduced it to its essence: a dream of the ancient past that lingers in the present, in her own words “a tender dream and an unconscious celebration.”  Her plot, a displacement of an ancient Greek myth, shares that dream and celebration. The virgin Persephone brought against her will to the underworld to reign over the dead – the ancient Greeks pictured Persephone crowned with asphodels –  shadows the story of the imperious Miss Sabina  told by three Mississippi spinsters with Greek names: Cora, the Greek word for maiden; Phoebe, which means shining and pure; and Irene, which means in Greek, peace.

Welty’s Asphodel, like the ruins of Windsor, sits just off the Natchez Trace, the old Indian trail, now a highway that runs from Nashville to the Mississippi river town famous for good times. The eight short stories in Welty’s 1943 collection The Wide Net, which included “Asphodel,” are all set along the Trace, as was her first novel, The Robber Bridegroom, written in 1942. In 1944 Harper’s Bazaar published an essay by Welty titled “Some Notes on River Country” revealing the root of her flower: her explorations of the Trace on foot, by car, and in books, through history and legend, superstition and fact, past vine-covered tree-trunks, flower-filled meadows, fishing villages and ghost towns and towering columns.

In the stage adaptation titled “Asphodel (Some Notes on River Country)” all the words are Welty’s. The story is framed by the essay as if it was divided up between the Asphodel spinsters. The music composed to accompany the story is by Paul Hacker, a Choctaw/Cherokee native Oklahoman.  For a Choctaw, the songs of the Natchez are as ghostly as Greek ruins in Mississippi, the same sort of  “a tender dream.”

Behind the performers are projections of  a dozen photos by Louisiana’s Clarence John Laughlin. Born in 1905, he died in 1985. The titles Laughlin gave these twelve photographs form a parallel story in the order that they are displayed:  “Toppled Glory,” “The First Appearance of the Fire Demon,” “The Enigma,” “The Mirror of Long Ago,” “ The Mistreated Nymph,” “ Temple to a Misplaced Past,” “The Mourning Oaks,” “Arboreal Skeleton,” “Deathly Forest,” and “Elegy for the Old South.” That last is a collage of images assembled by Laughlin onto “Toppled Glory.” The subjects are mostly the details of ruined plantations from Laughlin’s book Ghosts Along the Mississippi, first published in 1948. “The Mistreated Nymph” is on a building in Chicago. The photograph titled “The Mirror of Long Ago” is a fantasia of images from Parlange Plantation in southeastern Louisiana. According to the Historic New Orleans Collection, which holds ten thousand Laughlin photographs: “Parlange Plantation was founded by the Marquis Vincent deTernant, fleeing the Revolution in France. This is a composite print from two negatives of the interior of the house, showing Julie de Ternant, the tragic granddaughter of the old Marquis, who is said to have gone mad on her wedding night.”

Laughlin had no intent to illustrate Welty’s fiction, and she was certainly not dramatizing his silver gelatin prints. His photos and her story run parallel to each other because Welty and Laughlin walked through the same landscape. Each of them took pictures at the ruins of Windsor. Their visions diverge. In Laughlin’s photograph the vine-smothered tops of the columns seem to reach up and dissolve into clouds. We are led by Laughlin to think of disintegration and, ultimately, the mystery of death and his photograph’s title “The Enigma.” Welty’s photograph of Windsor includes a path, and a person. She has given the towering ruins a human scale and found a way to approach them – and to subtly include herself. Asphodel, the title of her story, is associated with death, yet Welty looked at ruins and imagined, for our consideration, life.

Gas was rationed in Mississippi during World War Two, when Welty was driving to the Natchez Trace. Yet it was essential she go there. Her close friend, John Robinson, was serving overseas in the U.S. Air Force. The news from the front was not encouraging. Her two older brothers were of age to be drafted. At a time of doubt for what might happen next in her life, and what might happen next to her family, to her friends, and to her country, she found relief and hope, even in a ghost town where, as her essay puts it  “A place that ever was lived in is like a fire that never goes out.

”The Mirror of the Past” photograph by Clarence John Laughlin, courtesy of the Historic New Orleans Collection.